About the Cambs Times

The Cambs Times began life as the Cambridgeshire Times in 1872, founded by the Sharman family who owned the title, and several others, until the 1980s.

As the title developed its aim was to become "one of the family", with an underlying philosophy based on the need for absolute fairness and accuracy in its reflection of the fast growing Fens area of the UK and, of course, its people.

A vibrant community, enjoying rapid and sustained economic growth, is now well served by a newspaper with award-winning print and web editions which have impacted greatly on the wider newspaper world.

The newspaper prides itself on its broad reach into the Fenland towns and villages it serves which embrace a growing portfolio of sponsored events that support many local groups and organisations.

Its small but dedicated news team enjoy enormous respect and is recognised widely for its authoritative coverage of major news issues and campaigns.

Coupled with a highly-motivated and professional advertising and sales force, the Cambs Times provides an industry beating 'Team Fenland' that continues to out-perform corporate objectives.

A super-kart driver from March is looking to go one better after capping a memorable 2019 season with silverware. 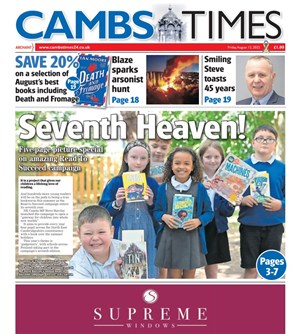